The City of Colorado Springs was founded on July 31, 1871. To recognize the 150th anniversary of this historic moment, there will be a celebration downtown along the newly redesigned Vermijo Street.

The festivities will take place on Saturday, July 31, 2021. This once-in-a-lifetime celebration offers something for everyone and admission is free.

The day begins with a parade at 11 a.m. on Tejon Street from Cache la Poudre Street to Vermijo Avenue. More than 50 entries from community members and local businesses and organizations will entertain attendees with a historic “parade through time” theme that represents key moments in Colorado Springs history. This will be the first downtown parade in the city since 2019 due to previous COVID-19 restrictions. Arrive early to get the best spot.

The parade will immediately be followed by an all-day street festival on the city’s newest signature street, Vermijo Avenue, stretching four blocks from the Colorado Springs Pioneers Museum to the U.S. Olympic & Paralympic Museum. Visitors can interact with more than 60 booths and activities that honor the city’s past and celebrate its future. There will also be 24 food trucks, beer gardens and two stages with a combined 16 hours of programming, including live music from popular local bands like Martini Shot.

The festival will be arranged in the following zones running from east to west:

Among the activities are stations to make a commemorative 150th birthday hat, panning for gold, a mechanical bull, blacksmith demonstrations and cultural performances on the historic gazebo in Alamo Square Park.

There will also be Olympic and Paralympic athletes on hand (Jackie Joyner Kersee, Bonnie Blair and McKenna Geer) for live panel discussions and autograph signings, a livestreamed broadcast of the Olympic Games on a 50-foot outdoor screen, high-flying sport demonstrations, and much more. The USOPM’s Tokyo Games Fan Fest is a free, four-day event from July 29-Aug. 1 on its outdoor plaza. 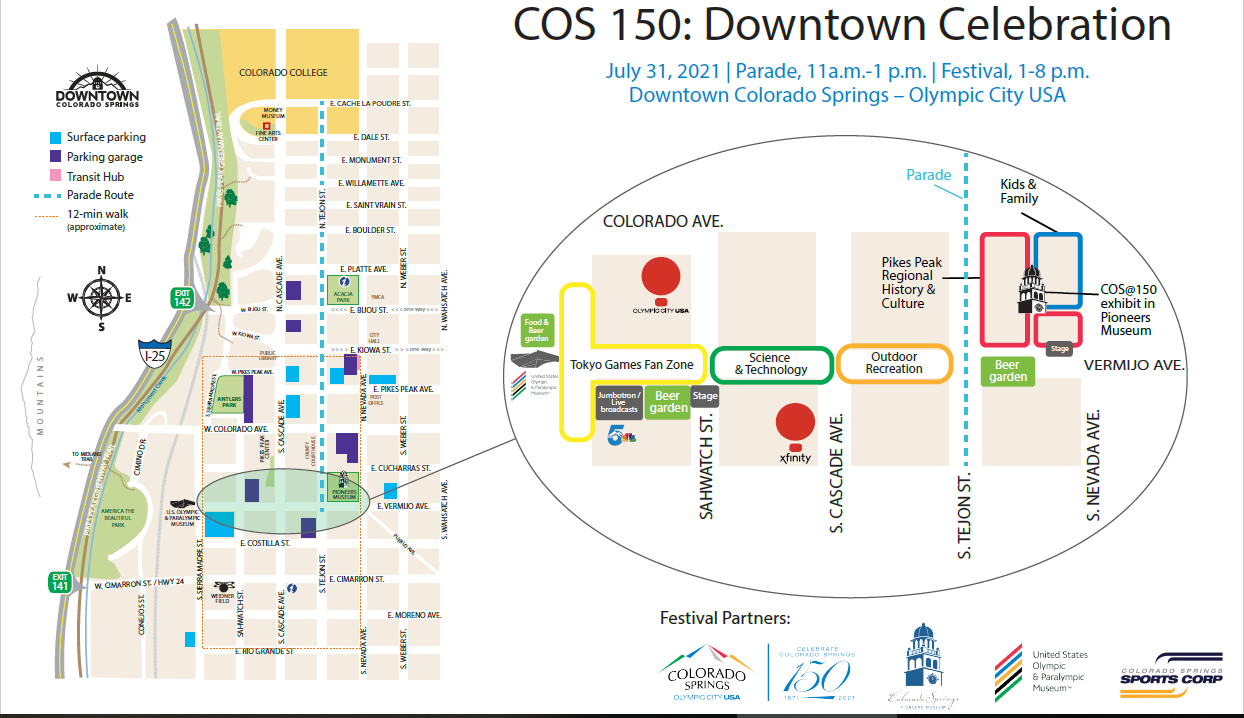 Follow the COS 150: Downtown Celebration Facebook event page for additional information as it’s released this month, like the full parade and entertainment lineup. The event is also actively soliciting volunteers, vendors and additional parade entries, though spots are filling fast. All volunteers receive a free t-shirt and meal at the festival. Learn more at ColoradoSprings.gov/COS150DowntownCelebration.

Get a weekly update of news, events and upcoming public meetings from the City of Colorado Springs.