The City is implementing a bicycle wayfinding signage system in a portion of the city. This new bicycle infrastructure consists of signs posted on streets and trails directing people on bicycles to use routes that are bicycle friendly (either streets with bicycle infrastructure or streets that are lower volume, lower speed and connect through the city) to get to desired destinations.

The City sought input from the public about additional wayfinding routes within the study area and citywide. This short survey provided valuable input in the development of new bike routes to popular destinations using information from people who ride bikes about their transportation habits and needs. 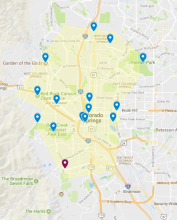 Map of the study area.

This project will develop the aesthetics of the signs, a consistent language for destination identification routing, sign placement, and establish routes across the study area. This program can then be seamlessly expanded into other parts of the city.

The initial project covers the identification of destinations and routes within the study area centered on Colorado Springs’ vibrant downtown. The first step was developing the aesthetics of the signs with stakeholder involvement. Next, the project team identified a priority route in Downtown, which will be implemented in late June, early July of 2018.

Implementing a wayfinding system in a city has the following benefits: 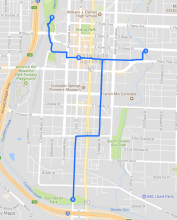 Bicyclists have been calling for wayfinding for some years because they have found it difficult to navigate the most appropriate route to get to their destination using bicycle infrastructure.

Toole Design Group was selected in winter 2018 to facilitate the design and implementation of wayfinding routes within the study area.

In tandem with implementing the priority route, a survey is underway to solicit additional route and destination recommendations from the public. Development of routes within the study area will follow. Installation of additional routes will likely follow in fall 2018 and may take a few years to complete, as resources allow.

At that point, the City has the option to expand wayfinding into parts of the city outside of the study area, using the language and aesthetics developed in this study.

Spring 2018: A stakeholder group met to determine the sign aesthetics and the priority route. This group included representatives from the following City departments:

And the following community groups, among others: